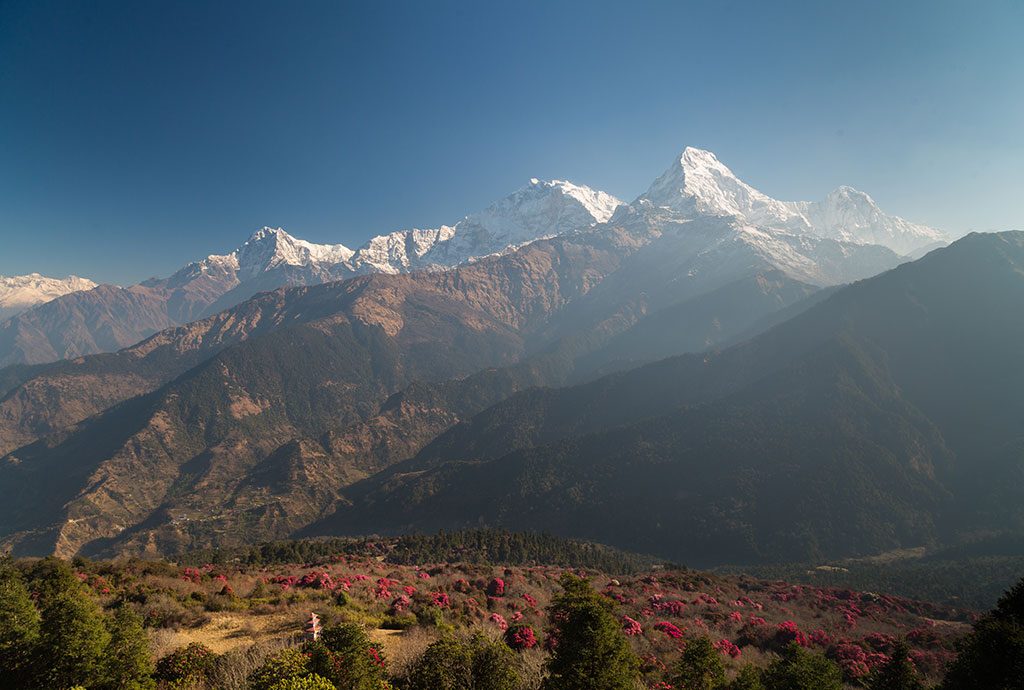 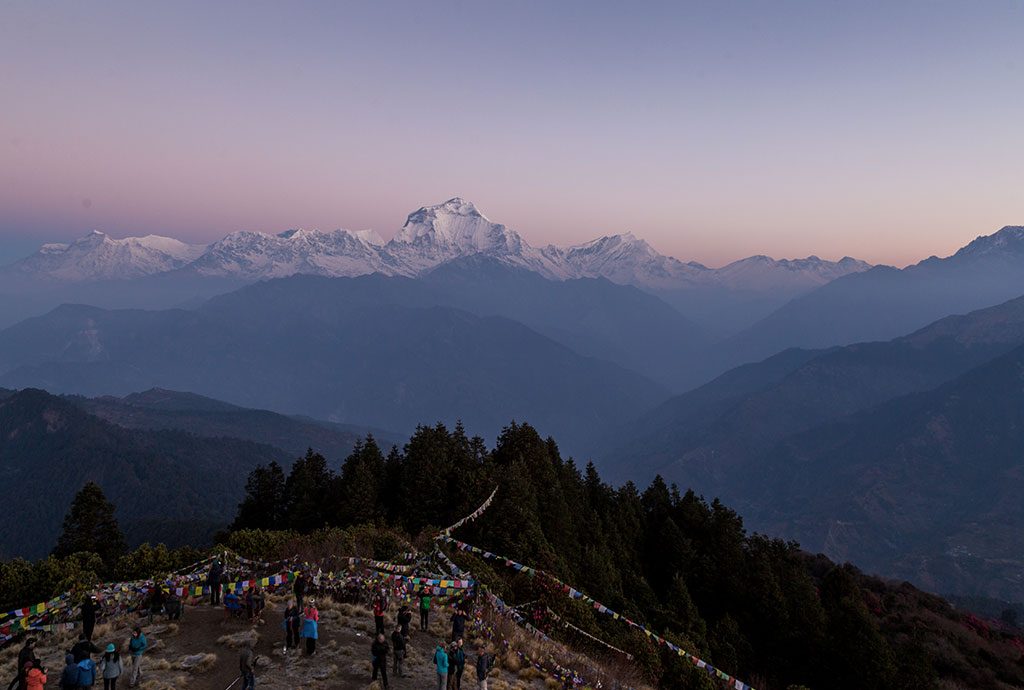 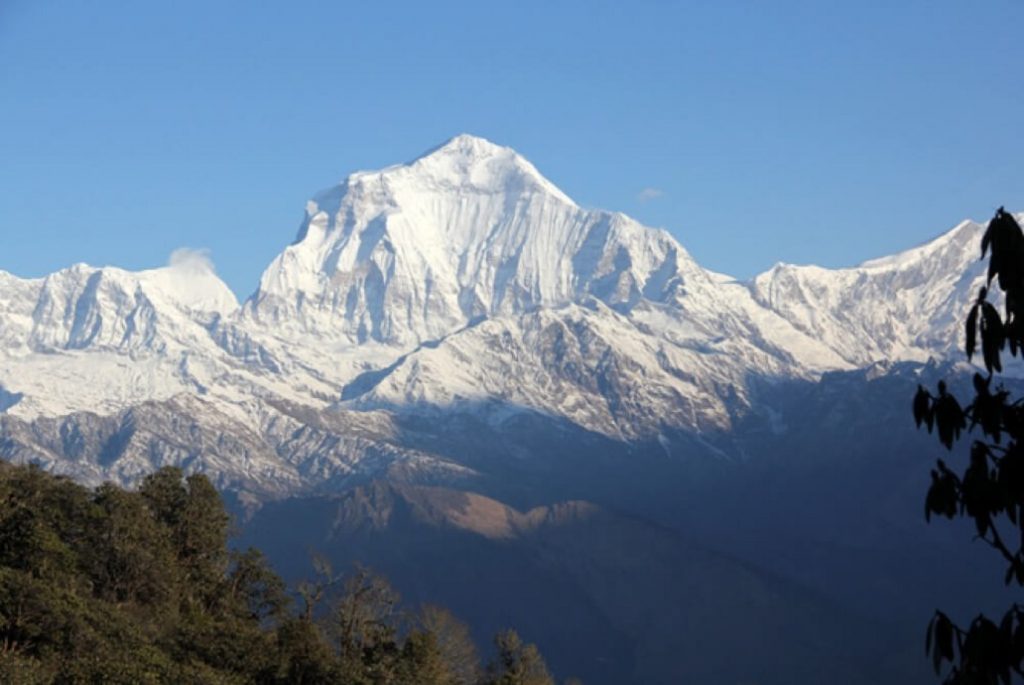 The Poon Hill trek is one of the best short treks in the Annapurna region. This region has it all. Spectacular views and breathtaking snow-capped peaks to clear lakes.

It is a photographer’s paradise and a perfect place to view such wide ranges of mountains on a clear day. The trekking also showcases a wide range of beautiful landscapes, deep rhododendron forests, wild animals and birds and ethnic local settlements.

The trekking route also has one of the biggest Gurung villages in Nepal, Ghandruk Village and clean Magar village at Ghorepani. The entire trekking route is a potpourri of traditional and cultural villages with family-run teahouses. The up-close view of the mountains from Ghandruk will take your breath away. Don’t forget to get by a Gurung museum that has been preserving and trying to display their culture, rituals, and traditions.

This Poon Hill Trek is rated as moderate and short trek around Annapurna region that is an equally adventurous trek. If you are looking forward to getting a taste of the mountains and the local culture without having to extend your leave, this is a trek you definitely need to schedule.

Day 1 :
Day 1: Arrival in Kathmandu and transfer to hotel

Your first day begins with your arrival at the airport where one of our representatives will come to receive you. You will then be transferred to your hotel in the capital. You can explore the historic places and visit UNESCO World Heritage Sites or can rest for the day if you are tired from your long flight and get your mindset ready for the trek.

After a rest day in Kathmandu, you will have to move to Pokhara in the morning. The bus ride takes anywhere around 6 to 7 hours, depending upon the traffic on the highway this time may vary. You can also take a morning flight which is around 20 to 30 minutes to Pokhara. Our package emphasizes going to Pokhara via bus ride as you will get the chance to view different landscapes.

After reaching to Pokhara you will be taken to your hotel. You can rest your day relaxing in this beautiful mountain city or refresh yourself near the tranquil Phewa Lake. Have a good night's sleep and prepare for the trek the following day.

Day 3 :
Day 3: Drive from Pokhara to Nayapul and trek to Tikhedhunga

After breakfast, you will be taken to a short drive of about 1 to 1.5 hours to Nayapul. From Nayapul you will start your trek, we will descend towards the Modi River. After you cross the bridge over Modi River, you will have to climb up through Birethati and Hille and will reach our first station, Tikhedhunga. This will be your shortest trekking day. You will rest overnight at a local tea house from this point. Tents can be arranged as per your package details.

Day 4 :
Day 4: Trek up to Ghorepani from Tikhedhunga

Today might be an adventurous trek. It is quite challenging yet exciting. Afterall we are here for the adventure, the thrill, aren't we? After your breakfast, you will be climbing very steep steps towards Ghorepani. These stone steps continue all the way from Tikhedhunga through Ulleri village. Hence this route is often called Ulleri Steps or Ullari Stairs.

You will have to ascend all the way till Ghorepani and you will surpass Ulleri village with wide range of typical Nepali houses and then forests of magnolia and rhododendron. The spring trekking will award you with a wide variety of flowers in the jungle. You could come across Nepali grayish white monkey named as Langur in these jungles.

If you are lucky you can get a glimpse of other mountain deer as well. The strenuous journey will soon end when you reach the gate at Ghorepani. This gate welcomes you to your final destination for the day. Ghorepani is a very peaceful and cleanest Magar village and you will enjoy your stay there. You will stay overnight and rest at Ghorepani.

Day 5 :
Day 5: Hike up to Poon Hill from Ghorepani and trek to Tadapani

This is the day, the most awaited day. You will view the panoramic view of the entire Annapurna and Dhaulagiri Range. The main objective of this trek isn't only this particular view, but believe me, it is definitely worth it. No wonder this trek is so popular.

You begin your hike at dawn from Ghorepani. It's best when you get to enjoy the sunrise. Most of the trekkers wait days at Ghorepani to get the glimpse of the clear mountain range view from Poon Hill.

Afterall you will need to be there before the sun. So an early 45-60 minute hike up the Hill will give you the view of the magnificent sunrise view of the Himalayan ranges. The spectacular view of the Annapurna South to Bahari Shikhar, Hiuchuli, Nilgiri, Dhaulagiri ranges, Tukuche peak, Annapurna I, II, III, IV, Lamjung Himal, Mt.Manaslu ranges, Machhapuchhre (Fishtail) and others mountains.

This viewpoint is considered as the best point to view the whole range with such clarity and distance. It is indeed a great spot for a photographer.

After spending your quality time at Poon Hill you will return back to Ghorepani for your breakfast and head towards Tadapani. Your trekking begins from ascending to Duerali and then descending towards Tadapani. You will find a lot of small streams and waterfalls. This jungle trekking along with stone steps surrounded on all sides by dense undergrowth and creeping vines will take away all the pain and stress. You will feel like you are actually on an adventurous journey finally. Eventually, you will reach Tadapani, where you will stay overnight.

After your breakfast at Tadapani, you will again descend through the forests to Bhaisikharka and finally towards Ghandruk Village. Ghandruk Village is one of the biggest villages of Gurung people. You can witness the Gurung culture at their Gurung Culture Museum as well. You will see all stone-roofed Gurung settlement in this village.

You can take your time to explore more of the typical culture and lifestyle of ethnic Gurung people and interact with the local people on this day. You can get an up-close view of the amazing Annapurna south and Fishtail Mountain from Ghandruk Village. Both the sunset and sunrise view of the mountain is equally rewarding. This will be the closest mountain view of this trek. You will stay overnight at a local tea house at Ghandruk.

Today is the last day of your trek and after your breakfast, with the view of the mountains up-close, you will soon descend towards Kimche. You can find local bus and jeeps from here to Pokhara. We will cover some more distance from Kimche and walk towards Nayapul. You will descend a long trail of stone stairs. It is a great time to relax and enjoy the descent. This trek begins at Nayapul and ends back here but all from a different route.

It is a great way to get thinking and planning on for next adventure, maybe find an alternative route. Who knows? By afternoon you will reach to Nayapul, from here you will then head back to Pokhara. You should reach Pokhara in about an hour to an hour and a half. You will again stay overnight in Pokhara, take your time to relax, rejuvenate in local spas and enjoy the evening.

You either have the option to explore your schedule and look for options or head back to Kathmandu. Pokhara has a lot to offer and it is also one of the most popular tourist destinations of Nepal. It is a cultural hub and welcomes all travelers with the best hospitality they can offer.

You can go sightseeing to its beautiful and popular places such as Sarangkot, Bindhawasini Temple, Bat Cave, Mahendra Cave, Davis' Falls and a lot more.

If you decided to end your trekking journey, you will be driven back to Kathmandu. It might take about 6-7 hours depending on the highway traffic. Once you are back to Kathmandu, you can take the remaining time and go shopping or visit the UNESCO World Heritage Sites. Just enjoy your time. We will be more than happy to arrange local tours for you.

Day 9 :
Day 9: Departure to Airport or onward for next program

Poon Hill Trek finally ends on this day. There are numerous other adventurous, long and short trekking programs and tours in Nepal. If you are an avid trekker, we will definitely meet again. Like mentioned, the Poon Hill Trek is only a taste of what more trekking in Nepal has to offer. If you are looking for something adventurous, the Everest Three High Pass is not to be missed out.

Finally, we come to an end of this program and we will make arrangements for you to be taken to the airport. You have to reach to there 2 to 3 hours before your scheduled flight.

We are sure that your Poon Hill Trek experience was worth all the time and money spent to create wonderful memories.

From $ 695
/ Adult
Need help with booking? Send Us A Message

Dolpo Region 27 Days
Upper Dolpo trek is considered as one of the most challenging and adventurous off-beaten treks in Nepal. Dolpo is one of the most beautiful and...
View Details
Available through out the year:

Annapurna Region 6 Days
$ 580
The 6 days Annapurna Base Camp trek is a short trekking itinerary mainly designed for trekkers who are physically trained for strenuous treks. And it...
View Details
Available through out the year:

Annapurna Region 14 Days
$ 925
Annapurna Base Camp is one of the most famous trekking routes in the world. There is no arguing this fact. It has been the hub...
View Details
Available through out the year: