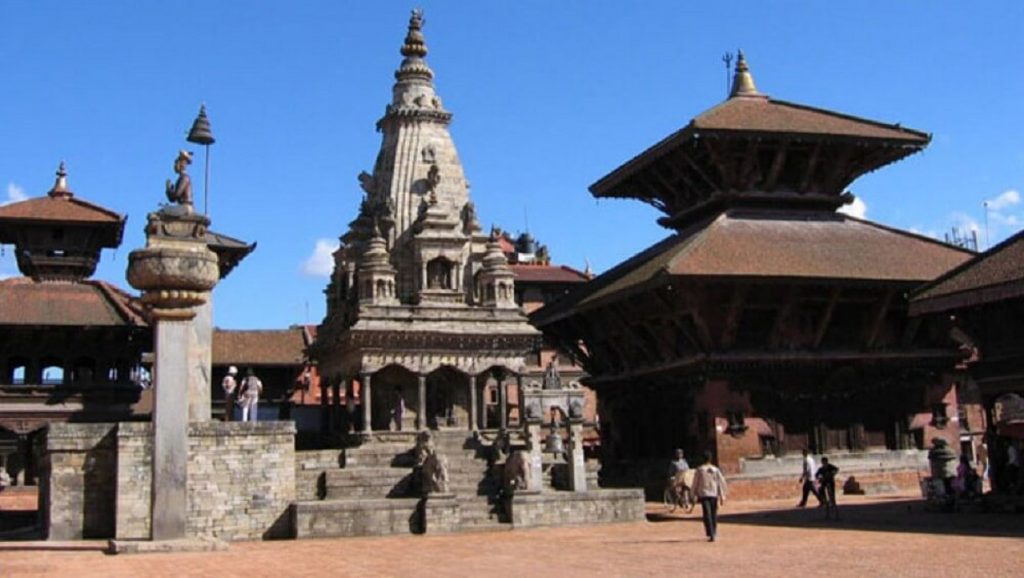 There are seven world heritage sites in the valley which lures most of the tourist to come to visit to Nepal. The ancient history of Kathmandu begins from Manjushree (The Kathmandu Valley Buddhist Saint). Before Manjushree came to Kathmadnu it was a lake, he cut southern side of the lake and drained out the water and made it in habitable. Many dynastic came and went. Trade and arts flourished. The Valleycovers an area of 596sq. miles. It is situated at 1330m.above the sea-level. Mountains surround the valley and it is divided into the three major cities of Kathmandu, Patan and Bhaktapur. These were once three different kingdoms and to this day retain their own rich artistic styles and traditions.  Golden triangle full day sightseeing included the major places of Kathmandu, Bhaktpur and Lalitpur.

Kathmandu Durbar Square showcases Nepalese art and architecture at its best. The architecture is typical of the Malla dynasty who ruled over Nepal from the 12th to 18th  century.

The Swayambhunath Temple has a compelling mix of both Hindu and Buddhist shrines and stupas. It is popularly known amongst foreigners as the Monkey Temple owing to the large monkey population residing in the area.

Pashupatinath Temple is situated on the banks of river Bagmati and is one of the main temples of Lord Shiva. The temple area is full of other smaller temples of numerous Hindu deities which gives the whole place an ambience of a sacred paradise.

The Bauddhanath Stupa is one of the largest stupas in South Asia which was built on the ancient trade route to Tibet. Beside the main stupa which was built in a Nepali Buddhist style, there are over fifty Tibetan monasteries around the area built by Tibetan merchants and the large influx of Tibetan refugees over the years. Here, you not only get to appreciate the spectacular art and architecture of ancient Nepal but that of neighboring Tibet as well.

Bhaktapur Durbar Square is much larger and more spacious than Kathmandu’s and much less crowded with temples than Patan. Bhaktapur Durbar square is one of the seven UNESCO world heritage sites located in the Kathmandu valley. Some of the most popular monuments golden gate, peacock window and Nyatapola temple are main attractions. Victorian illusrations show that it was that it was once packed with the monasteries, temples and artistic building, almost one third of which were dsetroyed by the earthquake of 1934.

Patan Durbar Square is a concentrated mass of temples, the most stunning display of Newari architecture to be seen in Nepal.  Listed in World Heritage Site, the former Royal Palace complex is the center of Patan’s religious and social life, and houses a museum containing an array of bronze statues and religious objects. The Aquare is full of ancient palaces,temples and shrines, noted for their exquisite carvings. One remarkable monument here is a 17th century templededicated to the Hindu God Lord Krishna, built entirely of stone.The Square has been described as one of the most picturesque collection of buildings that have been set up so small a place by the piety of oriental man. The important things to be seen in this area include the Golden Gate and the Golden Window of the old Palace, the beautiful piece of traditional metal crafts, the famed Krishna temple with 21 golden pinnacles, the Royal bath of Sundari chowk, and a perfect piece of the classic work in stone.The square has beenunrestrainedly adnored by the Bhimsen Temple, Manga Hiti, Vishwanath Temple, Jagganarayan Temple and numerous.

Day 1 :
Tour starts at 8:30 am, from Eagle Eye treks and expedition’s office (Thamel, Kathmandu Nepal). We can also arrange for hotel pickups and drops upon request. And we will visit the following places and Back to your drop off place at 4:30 pm with life time memory of Nepalese history, culture and arts.

From $ 120
/ Adult
Need help with booking? Send Us A Message

Kathmandu 1 Day
$ 195
Trip highlights 60 minute adventurous flight in  6 major mountain above 8000m in the world Mount Everest which stands at a towering height of 8848...
View Details
Available through out the year:

Kathmandu
Shivapuri Nagarjun National Park stands 2,732 m tall and is the 9th National Park in Nepal. Located in the country's mid-hills on the northern part...
View Details
Available through out the year: